OMG can you believe it is December already!  I have one more week of classes and then final exam week and then the semester is OVER! AHH!! This is crazy!  Unfortunately with the semester coming to an end, I haven't had a lot of time to be reading this past month, but I'm thinking that will change once I'm on break for Christmas!  Anyway, since it's a new month, here's a new haul! 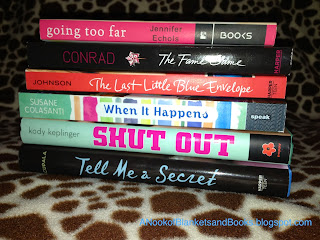 Going Too Far by Jennifer Echols

So, I was SO excited to get this book after reading Forget You by Jennifer Echols that I immediately started reading this book!  And I LOVED it so much that I have already posted a book review on it!  Definitely one to check out if you like Jennifer Echols!

The Fame Game by Lauren Conrad

Several years ago, probably after The Hills with Lauren Conrad, she published her L.A. Candy series.  I love Lauren Conrad so I definitely wanted to check these books out.  Overall, I thought the series was alright.  Definitely The Hills in book form.  They were cute, summertime, light reads.  Now years later since I read that series, I found her first book of the spinoff series, The Fame Game, on bargain price so I thought it would be fun to check out (especially at such a great deal)!

Over the summer, I read the first book in the series, 13 Little Blue Envelopes.  I loved the travel in this book that took the characters all over the world!  Although I wasn't a huge fan of the writing style and some other minor annoyances, I decided to pick the sequel out since it was at a bargain price (who can say no to bargain books?!).  I have posted a series review here!

When It Happens by Susane Colasanti

To be totally honest, I have no idea what this book it about.  :/  I have heard a few people mention it saying that it is a cute summer read, and again, it was at a bargain price, so I thought I would pick it up!

Shut Out by Kody Keplinger

I am VERY excited for this book!  I have heard a little bit about it, but mostly that it is people's favorite book and that they love Kody Keplinger!  I am really excited to read this book!

Tell Me a Secret by Holly Cupala

Once again, don't know what this book is about, but at bargain price…you know the rest!


Have you read any of these books?  Which ones and what did you think of them?


FTC Disclaimer:
All items mentioned were purchased by me.  This is not a sponsored post.  All opinions are my own.  No affiliate links were used.
Posted by Laura

Laura
Welcome to my Book Nook!! When I can, I love to snuggle in with a good book and immerse myself in a fascinating story. Through my reviews and hauls, I hope that we can chat and recommend books to one another! :) Follow me on Twitter! @BlanketandBook Follow me on Instagram! http://instagram.com/blanketandbook